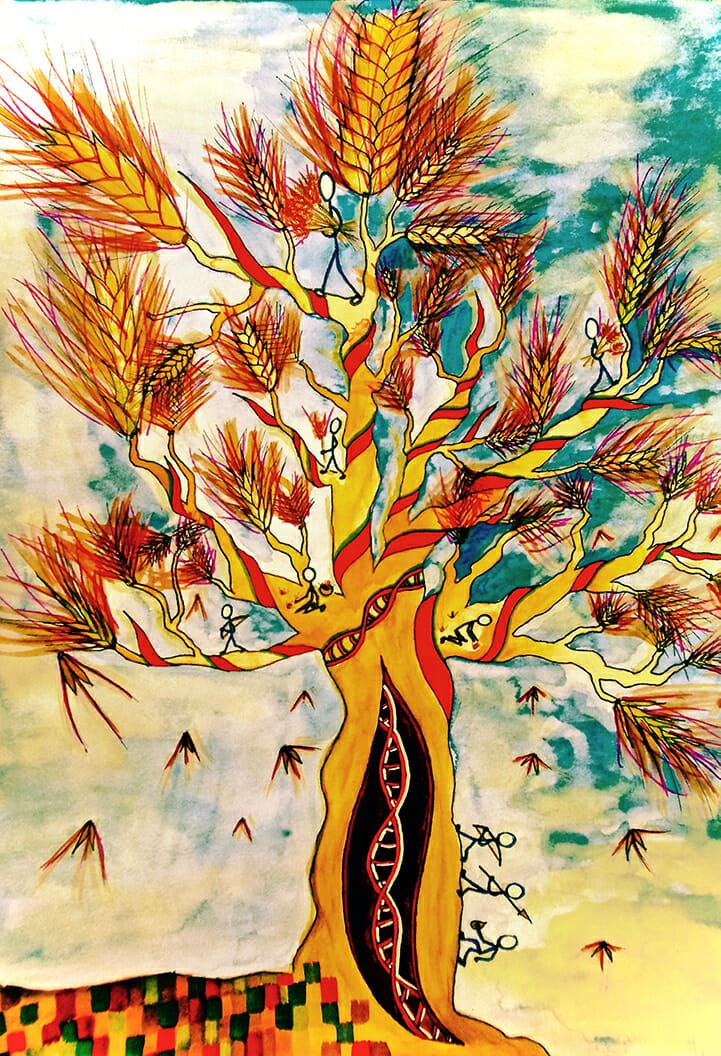 Bread is made from grain, no question.
Its origin takes us far into the past.

More than 12,000 years ago, with the beginning of the Neolithic Age, one of the most fundamental innovations in human history took place: the beginning of agriculture. Previously, wild plants were cultivated, fields were tilled and harvested and supplies for the winter were stored. The new lifestyle was less mobile compared to the nomadic hunter- gatherer, but could feed more people in a smaller space. We locate this change, called Neolithic Transition, in the Middle East. Here we find the oldest evidence in early forms of agriculture and farming as well as the first small villages and settlements. Even today, the wild grasses whose ancestors made history long ago as the forefathers of our modern grain still grow there. Maybe bread was even the reason that led our ancestors settle down, maybe it was beer. We don’t know. But it is certain that barley and wheat were among the first crops. Rye, on the other hand, probably found its very own way onto our fields.

But even when our ancestors were still wandering around as nomads, living from hunting and gathering, wild grasses were a coveted good. A remarkable archaeological site on the Sea of Galilee provides 23,000 year old evidence of this. Israeli archaeologists found numerous remains of various wild cereals here in Ohalo II. And not only that: grinding stones show that the grain was also processed – presumably into bread.

However, several millennia were to pass before agriculture finally began its triumphal march. At first, Europe was still firmly in the hands of the last great ice age. It was not until the beginning of the Holocene, about 10,000 years before our era, that a longer warm and humid climate reached us. The ideal conditions for a lush vegetation, which played into our hands for the targeted cultivation of the long time important grasses. 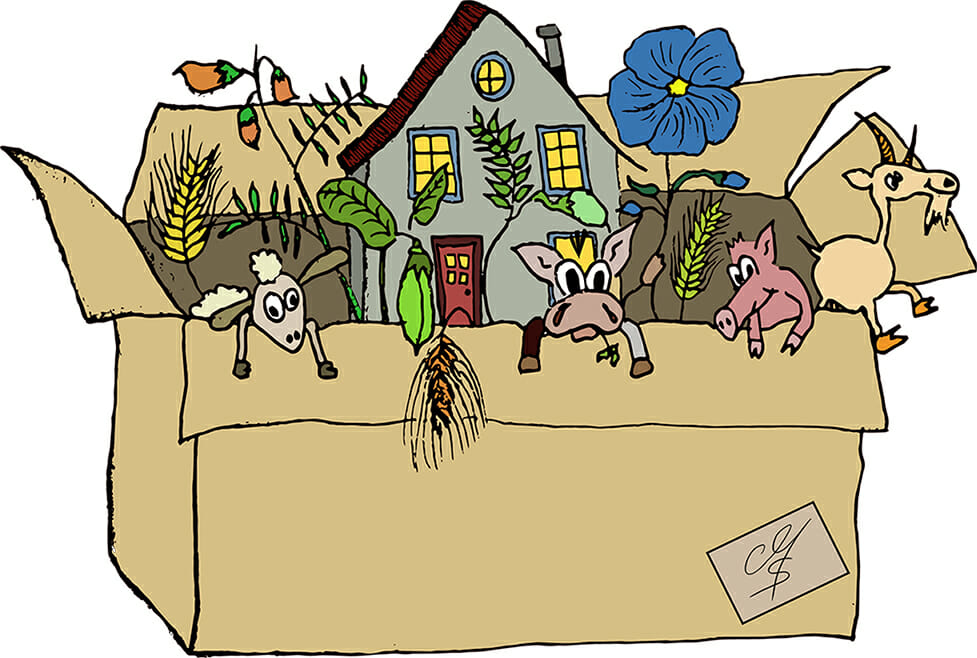 The plants and animals that became an immediate part of our human life began to differ more and more from their wild relatives. In the course of time, the very characteristics that were advantageous for living together with humans became established. We call this process of the inculturation of plants and animals domestication. We owe our current knowledge to many different scientific disciplines, which combine this complex interplay of the most diverse factors into one big picture.

In recent years, the analysis of the genome of animal and human remains from archaeological sites has been able to provide answers to some of the open questions that could not be answered by the classical disciplines such as archaeology and anthropology alone. Generation after generation the DNA is passed on from parents to their children. The ever-changing combinations and random mutations constantly result in minor changes, which can tell us much more than just the story of a single individual.

Bones and teeth provide comparatively robust containers for genetic material and allow us direct insights into past millennia. However, plants can only survive such a long time under special conditions. Mostly it is burnt remains that tell archaeobotanists which plants our ancestors used. Burning preserves the appearance, but not the DNA. 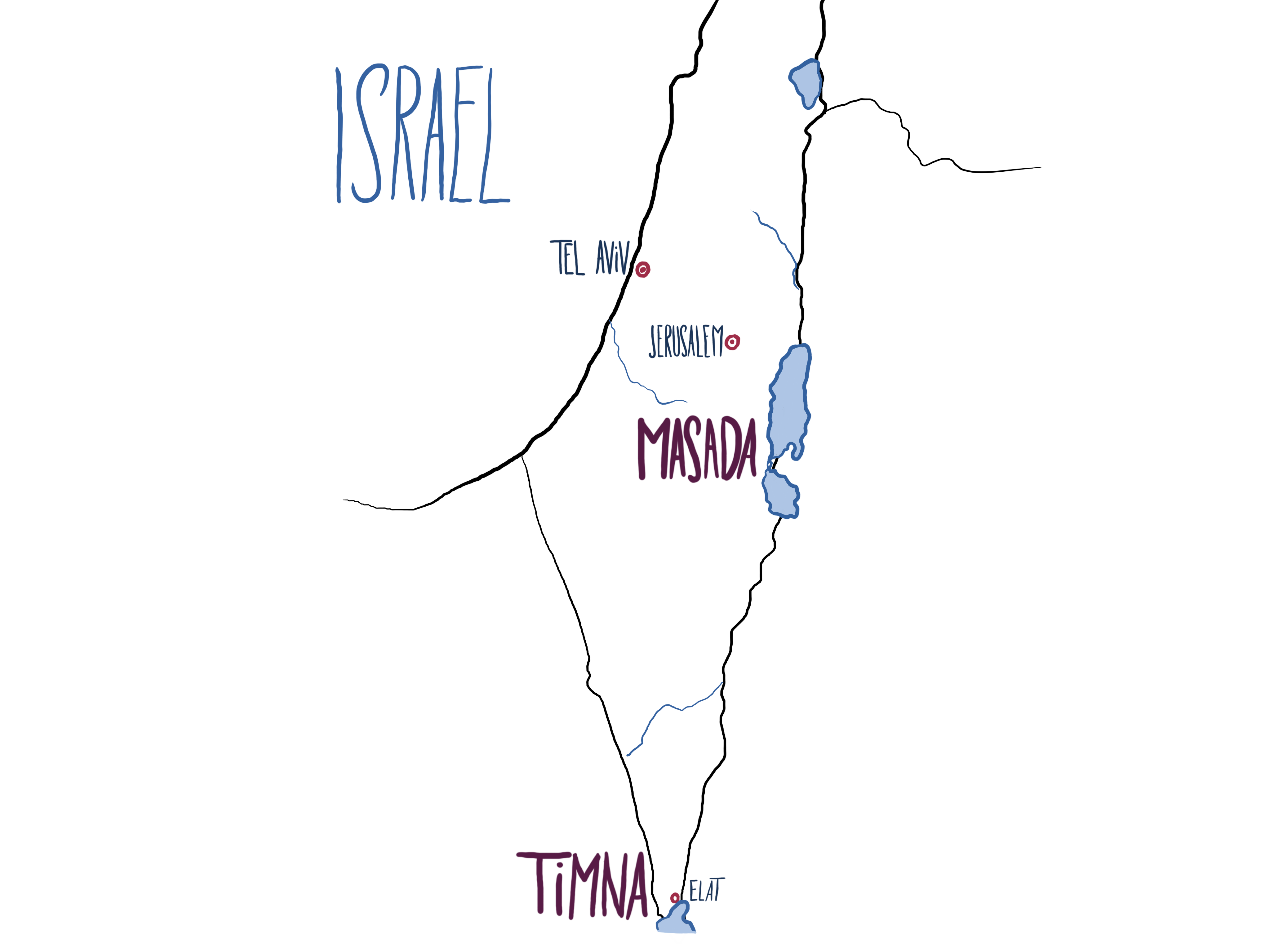 Shortly before I came to the Leibniz Institute of Plant Genetics and Crop Plant Research (IPK) in Gatersleben to study the domestication history of our cereals as part of my doctorate, I succeeded for the first time in examining DNA from 6,000-year-old barley grains. In a cave of the well-known Israeli site Masada west of the Dead Sea, astonishingly well-preserved cereal grains were found. It was not only the degree of preservation of the grains that made the investigation of the genetic material of those old samples successful. Only rapid progress in the sequencing of entire genomes, i.e. the decoding of the genetic code, made such an analysis possible even in the case of highly complex cereal genomes.

It may seem astonishing, but the genomes of our cereals are many times larger than those of humans; and they consist largely of repeats. A gigantic puzzle with thousands of identical pieces.

The samples from Masada together with 3000 year old samples from another site in the south of Israel showed me that barley has hardly changed in Israel in the last 6000 years. Since barley, like wheat, is self-pollinating, it is comparatively easy for us humans to maintain the plants, once adapted to human culture, from generation to generation without running the risk of constantly being confronted with new changes through mixing.

The situation is more difficult for plants that depend on other plants of the same species for pollination – like rye.

Rye has long been a mystery to science, and many theories have entwined themselves around its domestication history. The wild ancestor of this cereal, which is so important in Europe, is still at home in south-west Asia, as are the close relatives of wheat and barley. In the oldest sites of the fertile crescent, which indicate the transition from gatherers to farmers, there are in fact also numerous remains of rye. But then rye disappears from the picture. It does not spread westward with the other cultivated plants. Only in the European Bronze Age at the beginning of the second millennium before Christ do we encounter rye again. 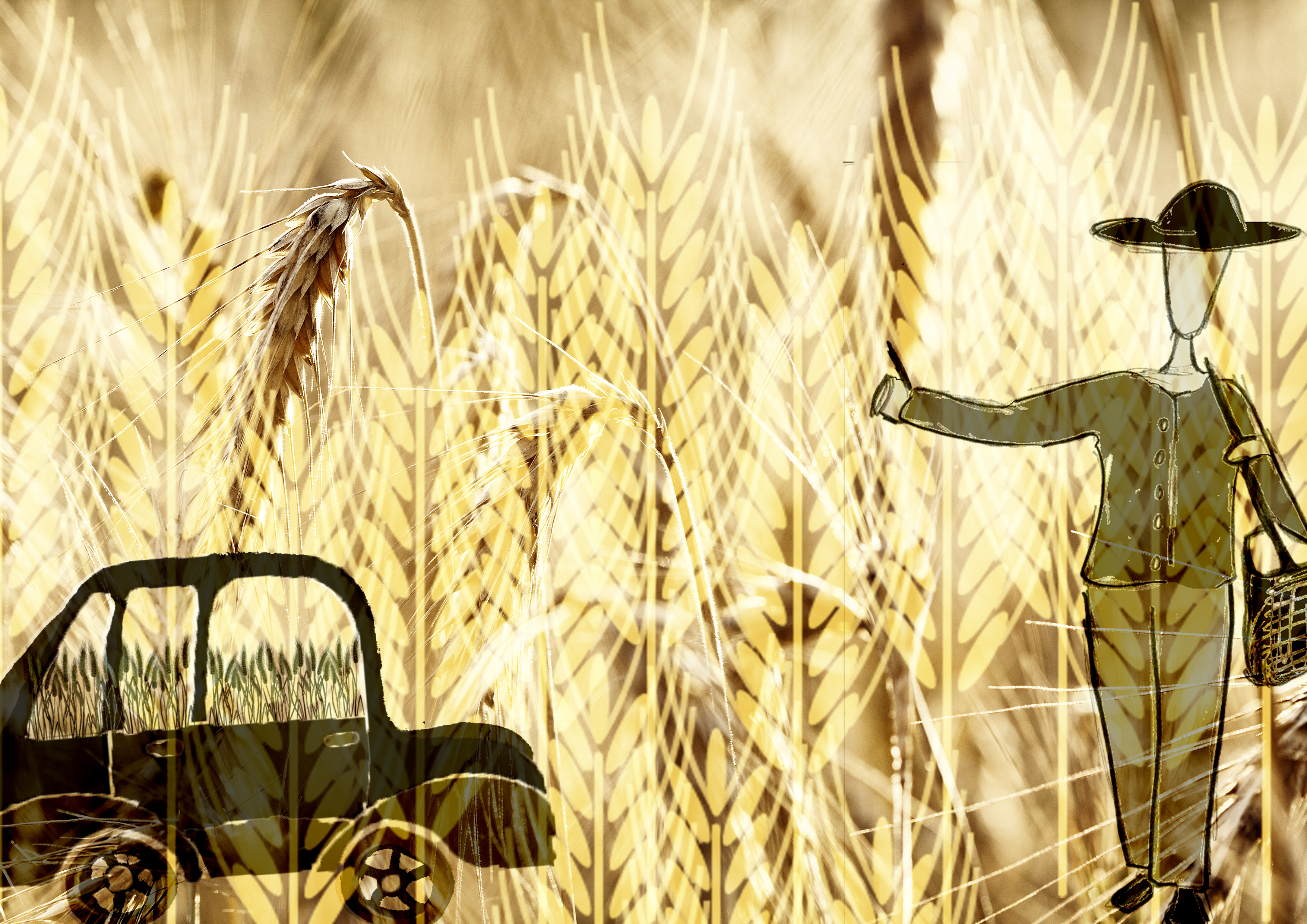 Even though they are not old samples that I examined, I was still able to get a first glimpse into the genomes of domesticated and wild rye plants of different origins. As previous studies had already suggested, genetically significant differences were found between Central European and Middle Eastern cultivated rye. However, the latter could not be genetically distinguished from his wild ancestor.

The Russian botanist and geneticist Nikolai Vavilov began to shed light on the relationship between our cultivated plants and their wild forms as early as the beginning of the twentieth century through extensive studies.

And it was he who formulated the idea that rye, disguised as a weed, came to Europe together with wheat and barley. Here it was colder than in the original areas of origin and the soils were poorer – conditions that rye can cope with much better than its close relatives.

The supposed weed thus offered richer yields and even though rye is more difficult to process than wheat, ways were quickly found to produce wonderful food from rye.

Its origin as a weed and the fact that rye can still be found as an undesirable guest in wheat and barley fields on the eastern edge of Europe and in southwest Asia are also consistent with my genetic data.

How can it be that plants from geographically so far apart regions are so similar, while the space between them is so clearly different?

The Iberian Peninsula is marked by its turbulent history, in which different groups of people have been able to take advantage of the benefits of this land. The first arable farmers brought with the classic Neolithic package those cultivated plants that were also known in the rest of Europe. 3000 years ago the Phoenicians came as traders along the North African coast and through the Mediterranean Sea. They brought wine and olives as well as millet and oats. Later the Greeks came with more olives, followed by the Romans with more wine. The beginning of the Reconquista with the entry of the Moors, like the Phoenicians across the Strait of Gibraltar, made grain on the peninsula more important again. 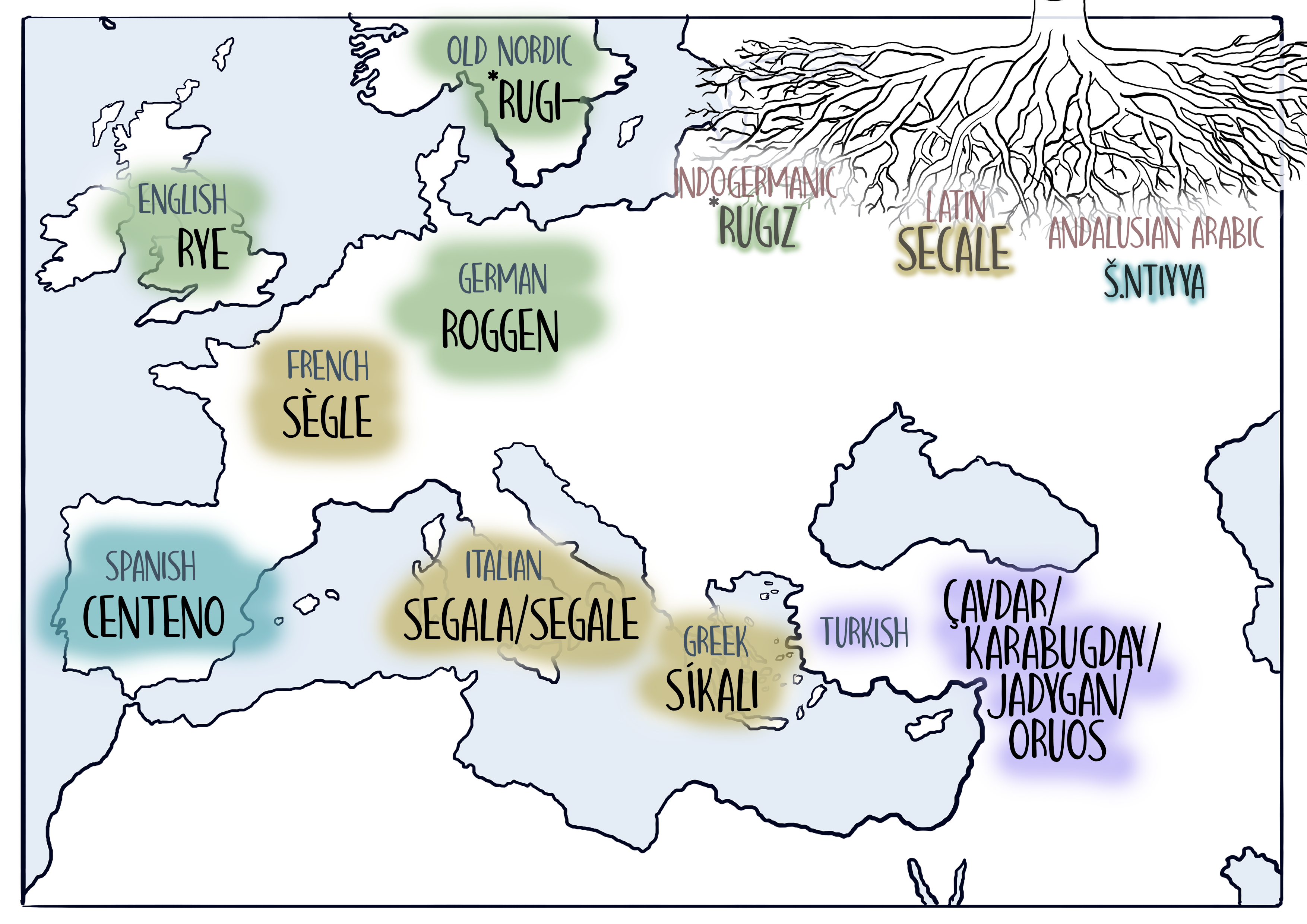 Curious, I took a look at other grains and indeed I found a similar picture with barley and even more pronounced with spelt. Even linguistically, barley (cebada) and rye (centeno) in Spanish differ from the words of the other Romance languages, which all go back to the Latin Secale. It is possible that these words came to the peninsula from the Arab world, but much of the Latin etymology lies in the mist of the past.

It was not possible for me to give conclusive answers, because research into the domestication history of our cultural cereals is still in its youth. With my work, I was nevertheless able to throw light on a few pieces of the puzzle in the big picture and at the same time ask new questions in the room.

So the only thing left for us to do is to continue our research.

At least for me, that’s the appeal of science. My curiosity is further fuelled by the carrot under my nose …
…or shall we say through a heavenly-scented rye sourdough bread. 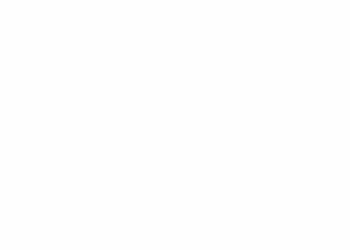 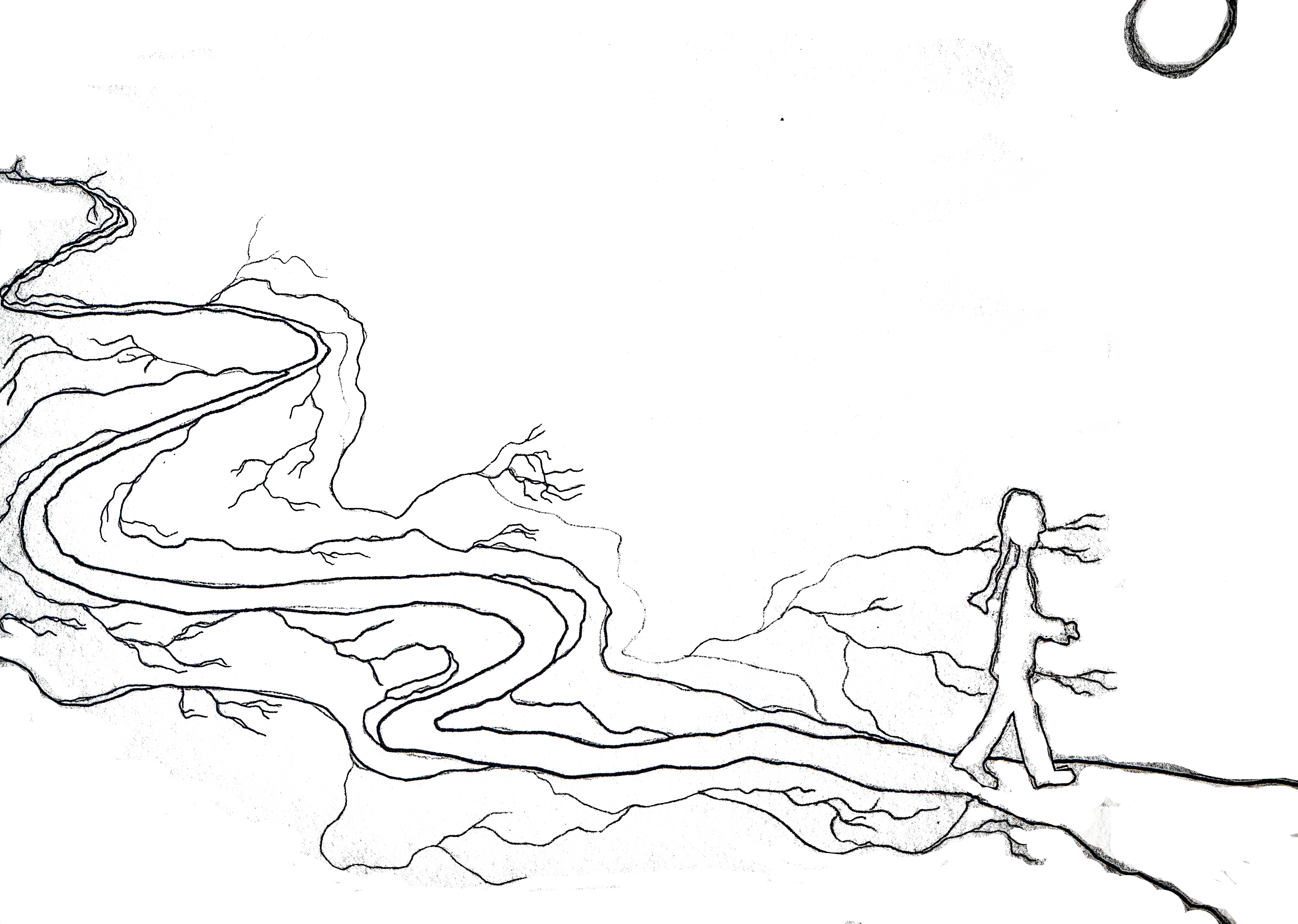 … here you can jump back to the overview of all portfolios.